150 YEARS OF GIANT LEAPS IN SCIENCE

Purdue University marks its 150th anniversary in 2019.  The College of Science joins Purdue in celebrating groundbreaking footprints in science that lead to giant leaps in discovery.   Purdue is sponsoring Astronauts visiting schools on a first come basis.  We are ‘over the moon’ excited that Astronaut Jerry Ross will be visiting St. Lawrence on Thursday, Oct. 10th from 9:45 – 10:45am in the Parish Hall!   He will be on a very tight schedule so we do look to start and end on time.  Astronaut Ross grew up in the country near Crown Point!  Several staff members attended a workshop at Purdue this summer where he was one of the speakers.

Each classroom was given a copy of his book Becoming a SPACEWALKER – My Journey to the Stars which they have been reading to prepare for his visit. He has a great story that the students will love and be able to relate to!  The conversation at dinner this night should ‘be out of this world’! 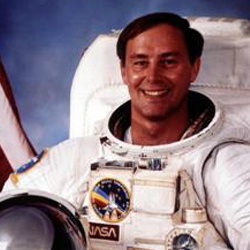 A veteran of seven space flights, Jerry Ross has spent more than 1,393 hours in space, including 58 hours and 18 minutes on nine spacewalks. Among his missions, he flew as a mission specialist on STS-37 in 1991, which deployed the 35,000-pound Gamma ray observatory. On the Spacelab D-2 (STS-55) mission in 1993, he worked with fellow crew members in conducting nearly 90 experiments. Then, aboard STS-74 in 1995, he participated in NASA’s second shuttle docking with the Russian space station Mir. In 1998, Ross served on STS-88, which was the first international space station assembly mission. He completed his seventh mission in 2002, serving as a mission specialist on STS-110.